Old photos and postcards gave us the true insight about certain life period of this region. For a long time, this area was uninhabited. The first legal document about Gorski kotar area, dates back to a court document in 15th century (22.02.1481.), when Frankopan family was ordered to stop collecting merchant’s taxes of traders who had properties around Moravice, Delnice, Lokve, Brod na Kupi. These villages represented an old Frankopan road connecting Gorski kotar with the coast. Frankopan family was ruling around coastal area (Krk and Vinodol), and expanded their powers to Gorski kotar in 14th century.
In 16th century Zrinski family inherited all Frankopan family estates around Gorski kotar. New rulers, brothers Nicola and Petar Zrinski used local resources and location with better business approach, by organizing trade and economy well. Petar Zrinski was ruling around all Gorski kotar estates between 1649.-1670.
After the Zrinski execution, territory was divided in many different ways, until Maria Theresa took over the administration and started uniting this area. In 1778. Maria Theresa established so called Processus Montanus – ie. Gorski kotar, the name hasn’t changed since. Economy, forestry and transit have had different stages of development. In 1809 the construction of Louisiana road started, nearby old Carolina road (built in 1728) and this had a major impact on trade development. Transport was booming, which prompted the openings of taverns and bed & breakfasts. In 1873. started railway construction, this has marked new modern era, when records are showing first signs of tourism.

Castle Zrinskih is a monument dating from 1651. Petar Zrinski started building his new castle, replacing the old one from 15th century owned by Frankopan family.

Castle Zrinski is a monument dating back to 1651 when Petar Zrinski started building his new castle, replacing the old one from 15th century owned by Frankopan family. Due to intensive use of valleys natural resources, Zrinski transferred all his administration from Hreljin, Bribir and Ledenice to Brod na Kupi.
Todays castle is a renovated three story building. Ground floor preserved castle original planning, with underground secret corridor connecting castle with church, nearby cave and river Kupa. First and second floor had some changes, but overall building has special cultural value due to its fortification function.
The castle opened in 2012, holding permanent exhibition of hunting, forestry and fishing. Natural History museum management took over the castle in 2014, when castle Zrinskih becomes only cultural museum in Gorski kotar. Permanent exhibition, mainly represents history of the castle and area, with showrooms of past local lifestyle.

The construction of the electric mill began in 1924 founded by Josip and Francika Mihelcic, who were returning from America. Building was completed in 1925, and started with production.

The Mill Popovic is over 85 years old and its owned by Mihelcic family. It is located near Delnice town center. The construction of the electric mill began in 1924 founded by Josip and Francika Mihelcic, who were returning from America. Building was completed in 1925, and started with production. Construction and building work were done by engineers from Budapest, where all mill parts came from. Mill was one of the first locations in Gorski kotar supplied with electricity. The mill continuously worked until 1960. Equipment is still preserved in their original form, today Mill is open for visitors.

Racki house is the oldest house, built in the traditional style, located near Delnice town centre at Supilova No. 94

Racki house is a protected architectural and ethnic heritage site. Its appearance can give us an insight about household activities, and building preferences of that period. It has been estimated that the house is approximately 200 – 300 years old. During the reconstruction period authenticity was preserved as much as possible. House was built to protect from long snowy winters, roof was made of wood and covered with shingles, hay was kept in the attic providing excellent thermal isolation. Racki house is the oldest house located at Delnice town center. Before reconstruction, long corridor (non-existent now days) were connecting all the rooms in the house with the loft. Floors were made of soil, central open fireplace was the focus point of the house where all social, family and work communications would happen. Toilet was in the barn out of the main house. Second most important area was the loft, where family would keep dry food, smoked/dry the meat, and store hay for domesticated animals which were located at the barn.

Highlights
Delnice folk costumes are partly inherited from our ancestors, and partly created imitating the style of the upper class of its time. White was the dominant color, enriched with details such as retrofire (colorful red, green or blue apron) with floral details, wool belt with green and orange lines. Accessories such as coral necklace and buckles gave the dresses an extra special detail.

Midsummer fireflies
In June, house Racki, represents revival of old customs in Delnice, when unmarried girls were throwing flower wreaths. Tradition says that during the midsummer bank holiday, the girls, whilst looking after the grazing cows, would knitt flower wreaths of daisies and later throw them on the top of the roofs. When wreath would stay on the roof, she would count how many roofs she tried to hit before wreath stayed on, that would give her the number of years she would have to wait to get married.

Vidm
Former cemetery and an old parish church of St. John the Baptist were located around Vidm area in Delnice. The archive suggests that church has been there since 1732, with 876 “souls” or members. Villages Lokve and Crni Lug were extended branches, exact look and location are not known, but have been described in church books from 1904-1914. Documents reveal that there was a parish house, but it was destroyed in 1862 by the fire, as well as local homes around east part of Delnice.

Church of Holly Cross (Sv.Kriz) of Calvary
Church of Holly Cross (Sv.Kriz) of Calvary – there are no records of chapel being built in parish books, but there are connections to old parish church around Vidma. Chapel was renovated several times, around 1964, when chapel was saved from total collapse, at the time of renovation they have built three concrete crosses at the front of the chapel. There are also records of chapel from 1861 when A. Rigoni is mentioning purchase of new altar. Finally, 2003 pastor Stanko Kovacic began complete renovation of the chapel, it is also known that this oldest chapel in parish region had impressive appearance of that time.

Delnice Stream "Potok"
Wellspring located at Delnice Stream "Potok", has an important characteristic of the old Delnice area. Wellspring was built in 1903 in memory while locals would work and live around the forest. Spring would give them break and refreshment from hard work, before going back into the woods earning their salaries. All economic activities since 1800 suggest that locals would earn money from jobs such as: cutters, herders, blacksmiths, wheelwrights, millers and others. Initiators of wellspring construction were three well-known local families; Kezele, Curl I Plese. On 25 of August 1903 wellspring was completed and put into a use, they have engraved those words for everyone to remember; “On this spot a person gets refreshment, and this water means life for every single local who lives around Delnice”. Soon location was well known, and busy with travelers commuting towards the coast or central part of Croatia.

St. Johns the Baptist Church at Delnice
The present church of St. John the Baptist was built by priest Nikola Car between 1825 – 1829. It is a simple triangular building, polygonal sanctuary, with a bell tower, which is located above the front entrance. The altar was designed in the late Baroque style.
The act of its consecration is linked to 2 June 1829, after the old church at Vidm was burned to the ground. The church has three stories; the central part is dominated by the altar dedicated to St. John the Baptist. There are also altars of the Holly Jesus Heart and the Heart of Mary, as well as statues of St. Antuna Padovanskog, Josipa and Gospe Lurdske
Parish church Delnice consists of two regional churches and two chapels, Marija Trost Church of Blessed Virgin Mary, Lucice – St. Church of Josip, Church of Holly Cross (Sv.Kriz) of Calvary , and Chapel of St. Antuna Padovanskog in Dedin.


St. Mary Magdalene Church at Brod na Kupi
In 1670 Petar Zrinski had built a parish church of St. Mary Magdalene in baroque style nearby his castle at Brod na Kupi. The church and the castle were surrounded by defensive walls to protect themselves from enemies. After second world war, church appearance has completely changed due to constant reconstructions. These reconstructions significantly reduced its originality.

The Church of St. Mary is in Velika Lesnica, near Kupa valley, it is one of the oldest religious monuments in the area, this church has a large bell tower on the north side. 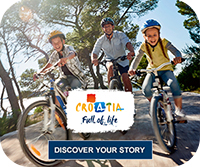 Copyright 2017 Tourist Board Delnice, All rights reserved. Development by CroSpot.